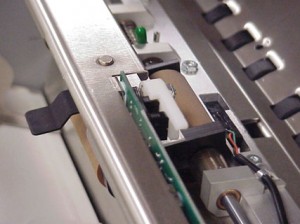 “If we [change] a component design after a short time, it might be more cost effective to build our own parts rather than pay…for tooling and production.”
— Michael Jones, Bell & Howell

Prior to purchasing a Fortus system, Bell & Howell’s design cycle was typically 18 months. “On average, we brought that down to about nine months: one-half the time it used to take,” says Mike Scheller, Director of Mechanical Engineering. “Much of that improvement is due to the FDM process. With it, components fit together better; we have a better idea of the aesthetics; and we have much better design review than in the past.” Engineers used FDM to improve assembly components in one of their high-end scanner models to compete for a multi-million-dollar contract. After just five months, the scanner re-design was complete and the company won the contract. 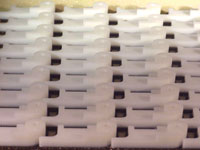 Like a number of progressive companies, Bell & Howell has learned that additive fabrication systems like FDM can be employed for direct digital manufacturing of parts for end use.

In the process of redesigning the assembly, engineers determined that the quality of a component called the flag hold-down, built on the FDM system, was better than needed to perform its job. And because they needed under 2000 units per year, the company could manufacturer them in bulk on the FDM system rather than order them from a molding company. They were able to manufacture the parts in batches of 50 and install them directly in the end-product.

“It’s advantageous to have the capability,” says electro-mechanical technician Michael Jones. “If a supply company failed to deliver a plastic part for some reason, we could prevent a production stoppage by building the parts on the FDM machine. Another advantage is if we planned to change a component design after a relatively short time, it might be more cost effective to build our own parts rather than pay a molding company for tooling and production.”